A recent massive review of the adverse health impact of water silicofluoridation in Ireland was described. One component of the 360 page study is reprinted with permission here.  It is a map of Ireland showing the borderline in red that separates Northern Ireland from the Southern Republic. Water fluoridation does not exist in Northern Ireland but has been conducted in Southern Ireland for over 4 decades. 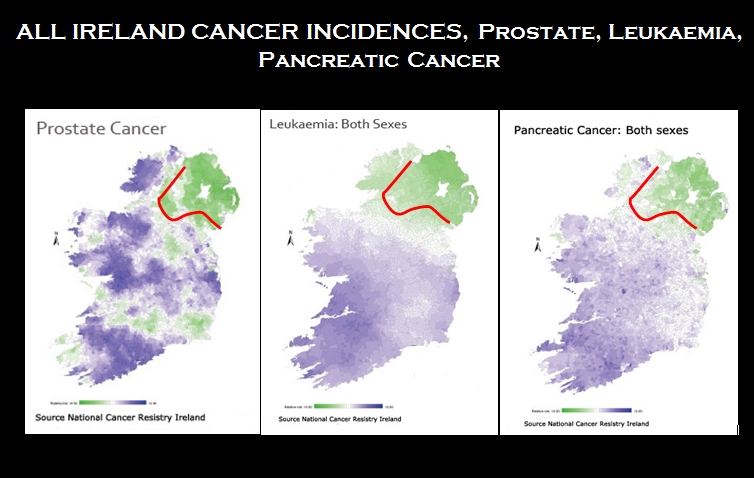 According to Declan Waugh, the award-winning environmental scientist who finished the report, Southern Ireland is now experiencing huge increases in incidence of various adverse health conditions that appear to be related to the fact that fluoride is a toxic calcium chelator, coupled with the fact that calcium levels in many areas in the South are deficient in endogenous calcium.   The scientific fluoride risk assessment study demonstrates the danger of water fluoridation on human health, the environment and animals. It can be downloaded at: www.enviro.ie. It is advised that the FDA, all concerned parents, farmers and government officials look at this document, with 1,200 peer reviewed studies.

These maps show cancer rates on both sides of the border that separates Northern from Southern Ireland. The Southern Republic has higher incidence of cancers than the North and what is most disturbing is that the cancers follow the circuitous border line closely. There are 18 cancers with higher rates in the South, even though the Irish live on the same island, breathe comparable air, and are of the same genetic background. Waugh concluded that the only definitely known difference at the present time that could explain this is the infusion into public water supplies of industrial fluorosilicic acid materials that takes place in all Southern Ireland but nowhere across the border in the North.

The maps are from the National Cancer Registry, Ireland (NCRI) for all Ireland 32 counties. Waugh wrote to the NCRI raising concerns that the only known environmental exposure present in Southern Ireland not present in Northern Ireland to which the population is fully exposed are industrial silicofluoride compounds added into Southern water supplies. Calcium is a known antidote to fluoride chronic poisoning, by raising the pH of the water and minimizing fluoride assimilation after ingestion, and the highest cancer rates indeed occur in those fluoridated Southern Counties with the lowest calcium level in the water. In light of these and other U.S. data (see previous letters to FDA), this must be considered as a risk factor in cancer prevalence.