Jane Brody – Sucked in by the pro-fluoride lobby 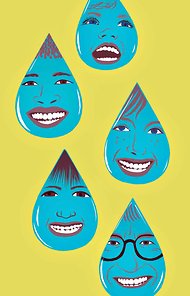 I admit to being jealous of my sons for growing up in a time when vaccines spared them miseries like the measles, mumps and polio scares that marred my childhood. But I’m most envious of their freedom from the dental decay that forced me to spend countless miserable hours with my mouth propped open while the dentist did his best to stay on top of rapidly rotting teeth.

By my mid-20s, I had already lost one molar and all four wisdom teeth, and every remaining molar had been restored with fillings.

It’s not that I failed to brush my teeth or that I noshed constantly on sweets. It’s that my teeth lacked the protection of fluoride, which was introduced to New York City’s water supply in 1964, five years before my twin sons were born but 23 years too late for me.

The Centers for Disease Control and Prevention calls fluoridation one of the 10 most valuable public health measures of the 20th century. In the early years, rates of tooth decay among the young dropped by 60 percent in communities that adopted fluoridation. My sons, who consumed fluoridated water in reconstituted milk and orange juice as well as in tap water, completed childhood with not one cavity.

Eventually, 70 percent of the country’s towns and cities adopted this measure, at an annual cost that today ranges from 95 cents to as much as $10 per person, depending on the size of the community. And even though it may have diminished the fortunes of the dental community, the American Dental Association, as well as most national and international health agencies, endorsed fluoridation without reservation.

In the years since, fluorides have been proved to reduce the rate of tooth decay in adults as well as in children. Older adults whose exposed tooth roots are highly susceptible to decay have particularly benefited.

It didn’t take long for commercial interests to hop on the fluoride bandwagon, introducing toothpastes and mouthwashes with fluoride, along with professionally prescribed fluoride tablets and drops, gels and varnishes. In addition, through the so-called diffusion effect, people living in communities without fluoridated water wind up consuming it in drinks and foods prepared elsewhere.

Together, these secondary effects have diminished the benefit that can be attributed directly to fluoridated water supplies to a reduction in tooth decay of about 25 to 40 percent. Still, the cost-to-benefit ratio remains strongly in favor of fluoridation.

Every $1 invested in fluoridation saves approximately $38 in dental treatment costs, according to the C.D.C. The cost of a single filling averages $140, and that’s only the beginning. Through the years, a filled tooth is likely to require further repairs and maybe even extraction and replacement with a bridge or implant costing thousands of dollars.

None of this, however, has quelled the controversy over the safety of fluoridation, which dates back to the first studies in the 1940s. In addition to being labeled a Communist plot and an unconstitutional form of mass medication, fluoridation has been accused of causing a host of medical horrors: heart disease, cancer, Down syndrome, AIDS, allergies, Alzheimer’s disease, mental retardation, osteoporosis and fractures, among others.

None of these supposed risks has ever been established in scientifically valid studies. The only proven risk, a condition called fluorosis, which results in white and sometimes brownish markings on the teeth from too much fluoride, rarely results from a normal intake of fluoridated water.

Still, given our increased exposure from other sources, in January 2011 the Food and Drug Administration proposed reducing the amount of fluoride put into water supplies to 0.7 milligrams per liter; a range of 0.7 to 1.2 milligrams had long been the standard.

As with most substances, the dose makes the poison: In very high amounts, fluoride is toxic, and products containing it should be kept out of reach of children. The government recommends that fluoride not be given to babies younger than 6 months — infant formula should be prepared with water that is not fluoridated — and children younger than 2 should not use fluoridated toothpaste. Those younger than 6 should use it only with supervision, to be sure they spit it out.

In the last four years, about 200 communities, looking to save money and rallied by opponents of fluoridation, have opted to stop adding fluoride to public water supplies.

Fluoridation confers the greatest benefit to those who need it most: the poor and poorly educated and those with limited access to regular dental care. In the years ahead, removal of fluoride from drinking water will almost certainly cost taxpayers millions of dollars in increased Medicaid expenditures.

Out-of-pocket costs will grow for other consumers, too — if not directly from increased treatment of tooth decay, then from having to use alternate treatments to glean fluoride protection.

Initially it was thought that fluoride had to become incorporated into tooth structures as they form in order to be protective. It was later shown that fluoride’s primary benefit is topical, working on teeth already in the mouth.

Tooth enamel is “fluid” — every day minerals are lost from it and added to it in processes known, respectively, as demineralization and remineralization. Tooth decay is an infectious disease. Decay occurs when bacteria in the mouth break down carbohydrates to produce acid that dissolves the minerals in tooth enamel and dentin.

Fluoride, which is present in saliva and concentrates in dental plaque, inhibits the action of acid on tooth minerals. It also promotes remineralization by sticking to tooth surfaces, where it attracts calcium ions present in saliva.

In addition, fluoride in drinking water is taken up by decay-producing bacteria, which inhibits their ability to produce acid.

Unchecked, dental decay can cause debilitating pain, tooth loss and the need for dentures. In severe cases, the infection can become blood-borne and deadly.

Some people are especially susceptible to tooth decay, including those with a history of frequent cavities, people with gum disease, and those who already have crowns or bridges or who wear braces. Others at high risk include people with dry mouth problems, like those with Sjogren’s syndrome; people taking medications that reduce saliva, like antihistamines and hypertensive drugs; and people being treated with radiation to the head and neck.

Filtered tap water may or may not contain fluoride. Reverse-osmosis filters and carbon filters with activated alumina remove most of the fluoride, but water softeners and charcoal or carbon filters do not.

Some water supplies are naturally fluoridated. If you use well water, it must be tested to learn the fluoride content. If you drink bottled water, check the label or contact the company. Distilled water contains no fluoride.

I am appalled that the New York Times can allow this kind of misinformation to appear on its pages. This article reminds me of the kind of poorly-researched fluff that appears in mainstream magazines, where corporate or government’s press releases are quoted verbatim and their validity taken for granted. The fact is that fluoride is a neurotoxin and there is indeed evidence that it is harmful. It’s been shown to lower IQ in babies, for example, which is why even the American powers-that-be don’t recommend it for the younger set. Fluoride is a by-product of the fertilizer industry. It’s in our water because the government colluded with industry to give them a market for this toxic by-product. While topical applications do seem to strengthen teeth, it is a fact that ingesting fluoride has no beneficial effect on the health of one’s teeth. It’s scandalous that our water is intentionally polluted with this toxin. In our home we choose to use reverse osmosis water to avoid, among other things, the fluoride our town doses into the tap. We also choose to use toothpaste without fluoride for our children, and we adults use baking soda. What keeps your teeth healthy is regular flossing, brushing, and dentist visits. Where by the way, I insist no fluoride be applied to my teeth. I can report that since I found out the truth about fluoride – thanks to the Internet – and stopped using it I haven’t had a cavity nor has my husband.

“None of these supposed risks has ever been established in scientifically valid studies.” What about this one, Jane?

“Fluoride in Drinking Water: A Scientific Review of EPA’s Standards”

This project was supported by Contract No. 68-C-03-013 between the National Academy of Sciences and the U.S. Environmental Protection Agency.

Start with those chapters, Jane. Your article is garbage.

The National Academy of Sciences is a private, nonprofit, self-perpetuating society of distinguished scholars engaged in scientific and engineering research, dedicated to the furtherance of science and technology and to their use for the general welfare. Upon the authority of the charter granted to it by the Congress in 1863, the Academy has a mandate that requires it to advise the federal government on scientific and technical matters.

To the Editor:Re “Dental Exam Went Well? Thank Fluoride” (Personal Health, Jan. 24): When the three of us (retired professors in chemistry, physics and biology) wrote a book on the fluoridation controversy, we hoped it would raise the level of the debate. In “The Case Against Fluoride,” our arguments were supported with numerous scientific citations, which proponents of fluoridation have made little effort to acknowledge or refute. We cannot expect sensible decisions to be made on these matters when one side pretends there is no debate and a leading newspaper like The New York Times lets them get away with it.