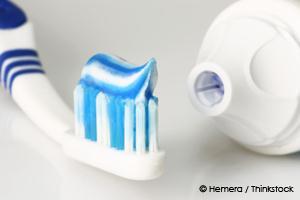 Fluoride, a neurotoxin that has been linked to reduced IQ, impaired neurobehavioral development and brain damage, among many other serious health problems, is sometimes prescribed in supplement form to children ages 6 months to 16 years who live in areas that have non-fluoridated drinking water.

The rationale, which is heavily promoted by government agencies like the Centers for Disease Control and Prevention (CDC) – or rather its Oral Health Division

Bodies like the American Dental Association (ADA), is that this toxic agent helps reduce cavities – and those children who are “unfortunate” enough NOT to have the poison forced upon them in their drinking water should get their daily dose elsewhere (i.e. in supplement form).

1) even promoters of fluoridation now admit that fluoride’s predominant action is on the surface of the tooth and not from inside the body (CDC, 1999) and

2) there are more than 100 published studies illustrating fluoride’s harm to the brain, plus 25 published studies directly linking fluoride exposure to reduced IQ in children! In other words, it doesn’t do much (if any) good to swallow fluoride and doing so could be doing significant harm.

Adding insult to injury, new research has further revealed that ingesting fluoride in supplement form does not reduce cavities in primary teeth – and may in fact cause harm.

Adding to the stark lack of supporting evidence, researchers pointed out that 10 out of the 11 trials they reviewed were at “unclear risk of bias,” and the 11th was at “high risk of bias” – leading researchers to conclude “therefore the trials provide weak evidence about the efficacy of fluoride supplements.”

This is not the first time a study has questioned the use of fluoride supplements. In 2008, researchers reviewed 20 reports from 12 trials and similarly concluded:

What is so ludicrous about these findings is that fluorosis is associated with the irreversible discoloration of the teeth (yellow and brown spots)  – the very aesthetically unappealing symptoms that most people think and are told the fluoride is supposed to prevent! The CDC admitted in 2010 that 41% of American children between the ages of 12-15 had this irreversible staining of their teeth (CDC, 2010) and in 2005 revealed that minority children are disproportionately impacted by this condition (CDC, 2005, Table 23).

The truth has always been that fluoride is a toxic agent that is biologically active in the human body where it accumulates in sensitive tissues over time, wreaks havoc with enzymes and produces a number of serious adverse health effects —including neurological and endocrine dysfunctions (NRC, 2006).

Nearly 10 years ago, Belgium banned the sale of all non-prescription fluoride supplements citing well-documented research indicating that ingested fluoride has “considerable potential” for physical and neurological harm, with little evidence of cavity prevention. The U.S. Food and Drug Administration (FDA), meanwhile, has not found fluoride supplements to be safe or effective, according to the National Institute of Health, which lists a laundry list of fluoride’s effects, including:

Not to mention, it’s known that over time fluoride accumulates in many areas of your body, including areas of your brain that control and alter behavior, particularly your pineal gland, hippocampus and other limbic areas. One particularly striking animal study published in 1995 showed that fluoride ingestion had a profound influence on the animals’ brains and altered behavior. Pregnant rats given fluoride produced hyperactive offspring. And animals given fluoride after birth became apathetic, lethargic “couch potatoes.”

This study was particularly powerful because the effects were measured using objective computerized evaluations of behavior, to rule out subjective bias by the researchers observing the animals.

For the past 60 years, pregnant women have ingested fluoridated water and used fluoridated water to reconstitute infant formula for their babies. If the adverse effects associated with fluoride exposure in animals are true for humans as well, we’d expect to see a striking change in human behavior at this point as well.

And we most definitely do!

One in ten children are now diagnosed with ADHD. While no US agency has funded or attempted to see if this condition has been caused by or exacerbated by fluoride the connection is biologically plausible and worrying. But the attitude of the American health authorities that continue to recklessly promote fluoridation is that the “absence of studies means the absence of harm.”

Aside from the animal studies that show that fluoride damages the brain, and the 25 studies indicating lowered IQ associated with modest to high exposure to fluoride, mild reduction of thyroid function in pregnant women has been shown to produce significant neurological problems in their offspring as well.

Outrageously, there is no mention of the risks or lack of efficacy on the American Dental Association’s Fluoride Supplements Web page, other than mild dental fluorosis. Instead they claim the fluoride supplements are “silently at work fighting decay. Safe, convenient, effective…”

Dental fluorosis is only caused by fluoride, and is typically due to ingesting too much during your developing years, from birth to about 8 years of age. Dental fluorosis is not a merely cosmetic problem, as it is usually an indication that the rest of your body has been exposed to too much fluoride as well.

You Can Opt Out of the Supplements, But it’s Much Harder to Get Fluoride Out of Your Drinking Water

The only positive side to fluoride in supplement form is that you can make a choice of whether or not to take it. In the case of the fluoride that’s added to the water supplies of nearly 75 percent of Americans, you have no choice. It’s there whether you like it or not.

China, in contrast, does NOT allow water fluoridation because it’s too toxic and causes damage, according to their studies. Instead, the waste product from their phosphate fertilizer industry is shipped to the United States, where we add it to our water supply!

This is a very important point: the fluoride added to your water is NOT even pharmaceutical grade.

It’s a toxic industrial waste product, which is also contaminated with lead, arsenic, radionucleotides, aluminum and other industrial contaminants. The story gets even more convoluted, as now declassified files of the Manhattan Project and the Atomic Energy Commission show that the original motivation for promoting fluoride and water fluoridation in the United States was to protect the bomb- and aluminum industries other fluoride polluting industries from liability. In the early days some of the sodium fluoride used to fluoridate water supplies in the U.S. came from Alcoa.

A couple of years later, they switched to the even more hazardous waste product hydrofluorosilicic acid from the phosphate fertilizer industry. But none of the studies on fluoride actually used the far more toxic and contaminated hydrofluorosilicic acid that is added to the water supply. Rather, they use pharmaceutical grade fluoride, which while harmful, is not quite as bad as what’s being used for water fluoridation. So, the health hazards are likely FAR worse than any study has so far discerned.

Some proponents of fluoridation believe that the large dilution of these fluoridating chemicals that takes place when they are added at the public water works ameliorates concerns about the known contaminants. However, one of those contaminants is arsenic, which is a known human carcinogen. For the EPA there is no safe level for a human carcinogen. Inevitably, the addition of contaminated hexafluorosilicic acid to the water supply by definition must increase the cancer rate in the U.S. because of the arsenic it contains.

One can argue about how much this cancer risk is increased by, but there is no question that it will be increased. Why would any rational government do that to reduce – at best – a miniscule amount of tooth decay?

For people living in areas with fluoridated tap water, fluoride is a part of every glass of water, every bath and shower, and every meal cooked using that water.

This makes absolutely no sense considering the significant health risks of this toxin — and the data published online by the World Health Organization showing that 12-year-olds in countries that do not fluoridate their water have similar if not better tooth decay rates than countries that do.

Join the Fight to Get Fluoride Out of Drinking Water

In summary it would seem most rational people would conclude you should avoid using fluoride for its “preventive” benefits. You can easily choose not to take fluoride supplements or buy fluoride-free toothpaste and mouthwash. But you’re stuck with whatever your community puts in the water, and it’s very difficult to filter out of your water once it’s added. Many do not have the resources or the knowledge to do so.

The only real solution is to stop the archaic practice of water fluoridation.

Earlier this year I joined forces with Dr. Paul Connett to help put an END to water fluoridation in the U.S and Canada. The Fluoride Action Network has a game plan to do just that. Our fluoride initiative will primarily focus on Canada since 60 percent of Canada is already non-fluoridated. If we can get Calgary and the rest of Canada to stop fluoridating their water, we believe the U.S. will be forced to follow. I urge you to join the anti-fluoride movement in Canada and United States by contacting the representative for your area below.

A victory there could signal the beginning of the end of fluoridation in the U.S. If you live in the New York area I beg you to participate in this effort as your contribution could have a MAJOR difference. Remember that one person can make a difference.

The point person for this area is Carol Kopf, at the New York Coalition Opposed to Fluoridation (NYSCOF). Email her at NYSCOF@aol.com. Please contact her if you’re interested in helping with this effort.