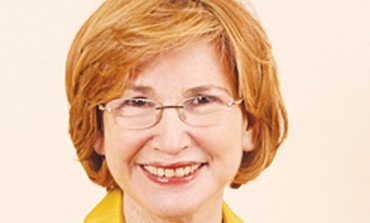 Health Minister Yael German Photo: Courtesy Knesset
As pediatricians and dentists charged that it would harm children’s dental well-being, Health Minister Yael German said Thursday that municipalities and local authorities would in a year no longer have to fluoridate their drinking water.German, who previously as mayor of Herzliya opposed “forcing” residents to take the mineral with every drop they drink, said there were more effective and safer ways to protect children’s teeth – such as fluoride pills, toothpastes and education.

She said she signed new regulations for stricter supervision of water supplies that included canceling mandatory fluoridation. German then even appealed to the High Court of Justice against the Health Ministry’s requirement – since 2002 – that water be fluoridated in every authority with at least 5,000 residents.

But the Israel Pediatrics Society said that bringing the national fluoridation project to a halt in another year “is liable to harm children’s dental health. Adding fluoride is the safest, most efficient and egalitarian way of reducing the prevalence of dental caries. It also provides clear economic and social benefits.”

Even if parents don’t ensure their children’s health by brushing with toothpaste and avoiding sweets, even poor children will be protected, the society argued.

Society head Prof. Eli Somech and director-general Dr. Tzahi Grossman said they were “convinced that the procedure is safe and that 400 million people in 60 countries – especially the youngsters – benefit from an optimal level of fluoride in their drinking water.”

Many decades of research and public statements by governmental and nongovernmental organizations have “already announced publicly that they support the continuation of fluoridation. Among them are the World Health Organization, the US Center for Disease Control and Prevention, the American Medical Association and the American Pediatrics Academy. The WHO has even come out with a statement supporting the Israel Pediatrics Society in its position.

But German said that the regulations that require fluoridation have expired and that “professional views are in dispute.” She said that opponents of fluoridation claim it could cause osteoporosis, reduction of insulin efficacy in dealing with sugar, the accumulation of aluminum in the body, IQ reduction and fluorosis (spotting of teeth).

Ronni Gamzu said that during the coming year, the ministry will invest funds to help the socioeconomically disadvantaged protect their teeth in other ways, if local authorities decide not to continue fluoridating their drinking water.

The voluntary organization Adam, Teva Ve’Din – which has for the last decade tried to change regulations regarding water standards, including better monitoring of contaminants – congratulated German on her decision, because water quality standards are “outdated.”

It said that during the coming year, there will be time for a public debate to decide if fluoridation is harmful or beneficial.